You are here:
Sports 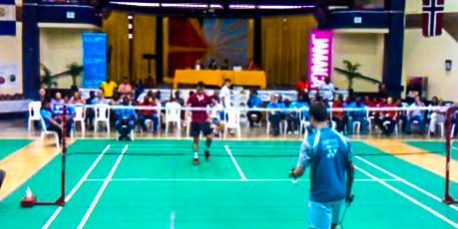 I love sports, I guess most guys do, and I play cricket, football and volleyball fairly well. I don’t get the opportunity to try new sports very often but just over a year ago, a ‘Flaavaful’ friend of mine invited me to play a game called badminton with him and a group of friends. My first impression was that it was an interesting game but it may be too easy for me. Hitting a flying shuttle back and forth didn’t appear to provide the thrill and complexity of chess. As with other things in my life, if its too easy, I don’t want it. Fortunately, I stayed and tried it out for a while. To my surprise, I missed more shuttles than I hit and learning all the rules made it clear, this game was no easy woman. Since then, I have been on a quest to improve, to learn, to master.

Playing Wednesday and Saturday nights really improved my game and before long, I was hooked. There are always players much better than I am, and my aim is to beat them, while having fun. Badminton, is an extremely fun and unpredictable game. The more I play, the more I learn and eventually I realized that being able to return the shuttle won’t make me a good player. It becomes necessary to use strategies and deception to earn points. You are an excellent player when you are able to constantly fool or tire your opponent. The game takes quite a lot of focus and it is interesting to observe the reactions of players who make simple errors. Badminton remind me that we are all human, and mistakes, though simple are often made. Missing a shot is a beginners mistake, but occasionally a seasoned player, in an intense match may miss a shuttle. This results in a feeling of rage and profanities often flows to the tip of the tongue. Fortunately, due to my positive upbringing, such profanities fail to verbally express themselves. In lieu of profanities, Christian friends would utter sounds such as “Grrrrr!” “ahhhh!” or “Mutah!!!” which helps to cool the burning feeling of disappointment.

Badminton always brings a very good vibe. An atmosphere of laughter, good conversations and a substantial work out, blinds us to the fact that we may be completely different people, with varying beliefs or cultural backgrounds. I use badminton as a channel to relieve the stress of school and work. Days may be very rough, with problems only God would understand, but a good round of badminton, win or lose, washes the pain away. It has become like a drug, It is my cocaine, it is my marijuana, a smoking hot game gets me high. I can remember having my PhD upgrade seminar presentation on a Thursday morning and I was up playing badminton at 12am. It really helped me to relax.

Let’s look at the history of Badminton

Badminton, for most of the twentieth century, was not a very popular sport worldwide but it has been around for over 2,000 years. Over 2,000 years ago it was played in Greece, India and China but was called ‘battledore and shuttlecock’. In this case the aim was simply keeping the shuttlecock up as long as possible while hitting it from one person to the other. Battledore and shuttlecock, according to the Badmintonworld Federation, was considered to be an upper class past-time activity in England and many European countries in the 17th century. In the 19th century a smart person decided to include a net. At this time the game was called “poon” and was played in India. The game was taken back to England and used to entertain the guests of the Duke of Beaufort at his home, a place called “Badminton” in Gloucestershire. The sport was named after this place. The International Badminton Federation (IBF) was formed in 1934 and India joined as an affiliate in 1936, just 3 years before the second world war. The first major IBF tournament was 1948, 3 years after the second world war. Badminton was never featured in the Olympics until 1992 (Barcelona) but has been a part of the commonwealth games ever since it was introduced here in Jamaica in 1966 as a commonwealth program sport.

I encourage you to try this sport if u haven’t, you won’t be disappointed. If I were to rate this sport on a scale of 1-10, I would give it a very very strong 8!
You may view an epic rally from a Wednesday night’s clash here:

Covid-19, Curfew and the Opportunities for eSports!
September 20, 2020