Lloyd Green,  my grandfather, called “Dada” or “Dockery” by relatives and close friends lived a full life and memories of him will live on.

I grew up with my grandfather and I have some fond memories of him. He was a good farmer, a humble man while being a firm disciplinarian. He was a deacon at the Giblatore Seventh day Adventist Church, the church for which he provided excellent service for decades. He sang beautifully both in the choir and occasionally solo.  With a clean baritone voice, frequent requests were made for his contribution to praise and worship. He spent a lot of his time on the beautification of the church, work which definitely has not gone unnoticed.

In the home strong leadership as the head of the household kept the family together and in line. He ensured that no mischief goes unpunished while no accomplishments, upraised. He successfully raised 7 children with his loving wife Henrita Green (Miss Nicey), sparing not the rod, spoiling not a child. I benefited from his traditional methods of disciplining and while in those moments I was not pleased, today I can proudly say, that my hind end thanks him. He took disciplining very very seriously and one may see well carved pieces of sticks positioned in specially selected corners of the house. Visitors would think they are nice displays, but we knew what they were for. His craftsmanship expanded far beyond that and he created very interesting pieces of craft items which he displayed at the community senior citizens club. I am happy I was able to assist in that area but it’s unfortunate he was not able to expose even more, his talents.

One of his most distinguishing features was his wit. Conversations with Dada almost always result in loud bouts of laughter after his very witty comments. His wit did not subtract from the fact that he was a very macho man and I am pleased to have had him as a father figure.

He died at the age of 76. Throughout his life he was very healthy, his recent trip to the hospital was his first and it led to his passing. He fought very hard through his sickness and just days before his passing, he acknowledged that he recognized me with his trademark head nod which he always used when stating phrases such as “yes man”. Grandad will be missed.

Matthew 5:4 Blessed are they that mourn: for they shall be comforted.

Rest in peace, Grandad, one day I will be with you in paradise. 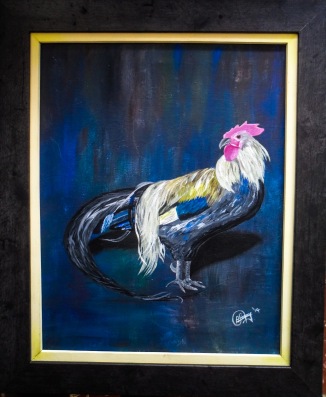